Be careful for nothing; but in every thing by prayer and supplication with thanksgiving let your requests be made known unto God. And the peace of God, which passeth all understanding, shall keep your hearts and minds through Christ Jesus. (Philippians 4:6-7, KJV)

As I drove to Church of the Holy Cross in Raleigh early on Sunday morning, July 1, 2012, the word, “Joy!,” suddenly came into my consciousness.  This would not be an unusual word if all that I had on my mind was the worship service I would soon be leading.  After all, I was about to preach on a passage from the gospel of Mark in which Jesus miraculously heals an older woman and raises a dead girl back to life.  I love to preach – and I especially love to preach on healing stories in Scripture.

However, I was also scheduled to undergo surgery the next day to remove a cancerous tumor from my left lung – a tumor of unknown origin – and there were two small tumors in my right lung that would need to be removed in a later surgery.  Yet, I felt joyful that morning on my way to church, although I didn’t realize it until I sensed the Lord speaking the word “joy” to me.  He was the reason for my joy – and all the conviction in my sermon for that morning, about how God delights in healing, helped me to trust that the Lord also had healing for me.  This conviction was a gift from the Holy Spirit and I marveled at the timing of my surgery and my service as a supply priest while my friend, John, was away on vacation.  It was no coincidence that on the day before surgery I would have the great privilege to preach about the authority and power Jesus has to heal – and to claim it for myself.

This pervasive sense of joy was present the next morning also, as I arose at 3:30 am to shower with an anti-bacterial soap formulated for patients about to undergo surgery.  I was continuing to “press in for my healing,” a phrase given to me by the Lord immediately following the news that a recent C/T scan had revealed the presence of a few small suspicious-looking spots in my lungs. I was buoyed by a profound sense that my life was in God’s hands – and that He would see me safely through the surgery – and through whatever lay ahead for me afterwards.

So instead of being fearful and worried about my own welfare, I was blessed to be “careful for nothing” (Philippians 4:6). I even had a sense that the Lord had an assignment for me: to give witness to Him, by my words and demeanor, to all with whom I would come in contact while in the hospital.  This remarkable freedom to be outwardly focused was a gift – the “peace of God which passes all understanding” – and something that is available to anyone through faith in the Lord Jesus Christ, no matter how dire their circumstances appear to be. 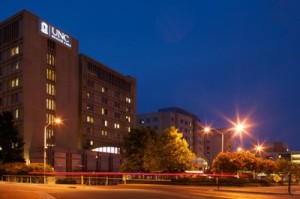 We left our house around 5 am and discovered that the road to Chapel Hill was nearly deserted, allowing us to arrive in record time.  After quickly and easily completing the check-in process on the ground floor of Memorial Hospital, Gil and I made our way to the second floor pre-surgery waiting room.  I had only enough time to look around the room and pray briefly for the people awaiting surgery, and their family members, before my name was called.  Gil accompanied me as I was escorted to the area where I would be prepped for surgery.

There was some initial confusion because the nurses could not locate the forms I had signed almost a week before, after my second appointment with Dr. Haithcock.  But after Gil explained that the date of my surgery had been moved up by several days, the staff concluded the paperwork was probably lost, so I filled out a new set of forms.  But this was the only glitch I encountered and in no time at all I was ready for surgery.  Soon after, a resident in thoracic surgery reviewed the surgical procedure with us, and then after a moment for prayer with Gil, I was taken to the operating room.  Everything was happening on schedule that morning.

The surgery did not last long and by lunchtime I had awakened in the recovery room, where I then spent several hours before I was deemed ready for a hospital room.  I was in pain, but it was bearable with medication.  However, I had been under the erroneous impression that I would be discharged and sent home the same day as the surgery, so I had not brought along my phone, computer or any reading materials.

One of the nurses explained to me that no patient is ever sent home the same day in which Video Assisted Thoracic Surgery is done because a small, thin tube inserted into the area just outside the lung during surgery must remain in the patients’ body for twenty-four to thirty-six hours after surgery.  The tube allows for trapped air to escape.  If the tube is removed while air is still escaping, pressure from the remaining air, which is now trapped, will cause the lung to collapse.  I was disappointed, but I did not panic; I sensed the Lord assuring me that no matter how long I would be in the hospital – perhaps even over the 4th of July holiday – He would be with me and would use that time for good.  His surpassing peace was standing guard over me. (Philippians 4:7)

I was given a chest X-ray early the next morning which indicated that my lung was properly inflated.  An hour later two of Dr. Haithcock’s residents determined, after listening carefully with a stethoscope for the sound of escaping air, that the tube could come out.  However, a thoracic nurse assigned to my floor disagreed with their conclusion.  When she listened with a stethoscope, she detected a slight sound of escaping air.  Unfortunately, she was overruled and the tube was removed.  However, she was proved right when an X-ray taken shortly afterwards revealed that my lung had collapsed.  So, there was nothing else to do but re-insert the tube.  This was done by the nurse, in whom I had great confidence.  She performed the procedure using local anesthesia while I sat on my hospital bed.  She did her job well and I did not feel much pain.

But this meant I would have to remain in the hospital at least one more day – and I had a feeling that I would be spending the 4th of July in the hospital, also.  I was sorely tempted to give in to self-pity and resentment.  I wanted to go home and be with my family and the constant monitoring by the medical staff, throughout the day and night, had led to serious sleep deprivation and I longed for an extended period of uninterrupted rest.

However, I knew from experience that feeling sorry for myself would not improve my situation, nor would it hasten my return home.  In fact, it would only make me less able to receive God’s grace.  So, I made a conscious decision to take my feelings to the Lord in prayer and listen for His perspective on my situation.  Throughout the day, as I continued to seek God’s direction and word and respond to His promptings, I received the grace to face the disappointment and irritations with a measure of equanimity.

The Lord even helped me to view my extended stay as an opportunity to continue to share my faith, through my words and actions, with hospital employees.  He also led me to compose a list of things for which I was grateful and on it I made note of the many blessings I was experiencing in the midst of my stay in the hospital.

However, I did reach a low point on the afternoon of July 4, so I asked Gil to write a post for my CaringBridge site.  He asked for prayers that my lung would heal quickly so that I could go home.  Shortly afterwards, my outlook improved and I received strength from the Lord to face another night of constant sleep interruption.  The next morning, after carefully listening for any sign of air escaping from my lung – and finding no evidence – the tube was removed again.

This time my lung did not collapse, so I was discharged late in the afternoon.  I spent most of the next few days resting because I was still in some pain and was feeling rather weak.  Although I was scheduled for one last Sunday as guest preacher and celebrant at Church of the Holy Cross, Gil and I had agreed before my surgery that he should preach and lead the service of worship.  That Sunday I did not even have the energy to get dressed for church, so I stayed home and rested.

On Tuesday, July 10, we returned to the UNC Medical Center for a follow-up appointment with Dr. Haithcock.  After examining my latest chest x-ray and the incisions from the surgery, he reviewed with us the pathology report.  In his usual straightforward manner, Dr. Haithcock delivered the news: the tumor was a metastasis from the parotid gland tumor removed the previous December – a tumor which had been deemed “not likely to metastasize.”  This was not the news Gil and I were hoping to hear.

Although Dr. Haithcock was eager to remove the two miniscule tumors in my right lung, he wasn’t sure what the next step would be.  A Tumor Board would meet to discuss my case and I would be referred to a thoracic oncologist who would oversee my treatment.  Dr. Haithcock thought that I might be advised to undergo first an intensive round of chemo in the hope that this treatment would shrink or completely obliterate the tumors – and keep any new ones from developing.

So, he set up two appointments for me: the first, with a thoracic oncologist, scheduled for the following Monday, July 16.  The second, with him on the day after my appointment with the oncologist.  By that time we would know what the recommended course of treatment would be.

The news contained in the pathology report was definitely not what we were hoping to hear.  However, Gil and I still trusted that the Lord had a way through this horrible disease, so we set our sights on Him and awaited my next round of appointments.

In TWO weeks’ time: getting ready for the next – and final – step.

I am an Anglican priest, author, wife and mother. Writing and teaching about Christian life and faith are passions of mine.
View all posts by Claudia Dickson Greggs →
This entry was posted in Light in the Valley of the Shadow of Death and tagged cancer, healing, Jesus, Philippians 4:6-7. Bookmark the permalink.