When you pass through the waters, I will be with you; and through the rivers, they shall not overwhelm you; when you walk through fire you shall not be burned, and the flame shall not consume you. For I am the Lord your God, the Holy One of Israel, your Savior. (Isaiah 43: 2-3a)

As I stood waiting by the dining room window I saw Sam’s car pull into my driveway, the headlights glowing in the dim light of early dawn.  He was right on time, as I knew he would be.  It was 6:50 am on Monday, January 9, 2011 and my friend, Sam, had come to take me to my first round of chemotherapy and radiation treatments at the Cancer Hospital at the University of North Carolina at Chapel Hill.  The first appointment was scheduled for 10:30 am, but our goal was to arrive well before 9 am, and we were hoping to get a head start on the rush-hour traffic which would inevitably clog the main artery between Raleigh and Chapel Hill.

UNC Medical Center. The Cancer Hospital is on the right, in front of the water tower.

I was told to expect that my morning appointment, which would be the first of seven weekly chemotherapy treatments, could take as long as three hours, which meant that if it began at 10:30, I probably would not be finished much before 1:30 pm.  However, the first of my thirty-three daily radiation treatments was scheduled for 1:45 pm.  This window of fifteen minutes did not give me much time to get from the second floor, where infusions are done, down to the lower level where I would receive my radiation treatment.  It also left no time for lunch, if I was feeling well enough to eat after chemotherapy.

Furthermore, since most cancer patients at UNC undergo chemotherapy treatments on Mondays, and some patients require more time than others, usually by 10:30 am there are numerous delays and patients sometimes have to wait for thirty minutes or more before they can begin their treatment.  Whoever put my schedule together for the day did not allow for such delays.  So, Dr. Hayes, my medical oncologist, suggested I arrive about two hours ahead of time so that my blood work could be processed quickly and my treatment could get underway by 9 am.  He told me to use his name if anyone questioned why I had arrived so early.

I was nervous about this first day of treatments.  I had no idea what a round of chemotherapy entailed or how I would feel during and immediately after it.  Would I be sick to my stomach?  Would I be well enough afterward to endure the radiation treatment?  And even if I was feeling up to it, would I be able to handle being immobilized in the confines of the radiation machine for fifteen minutes – or longer?  As I thought about these questions, the Lord brought to mind several verses from the forty-third chapter of Isaiah.

I had memorized the entire chapter several years before because it spoke so strongly to me about how hope in a God who can make a way out of no way changes everything for the person who chooses to trust in such a God.  But now, as I was about to begin a regime that would inevitably make me very sick, and may even debilitate me permanently – all in an attempt to cure me of something deadly – verses two and three of chapter forty-three took on new meaning: When you pass through the waters, I will be with you; and through the rivers, they shall not overwhelm you; when you walk through fire you shall not be burned, and the flame shall not consume you.  For I am the Lord your God, the Holy One of Israel, your Savior.

These verses were a powerful promise to the people of Israel about how the Lord would enable them to endure the trials of exile and would eventually bring them back to the land from which they had been taken, but yet, they also seemed to speak to me in my situation, thousands of years later: about how the Lord would help me endure the trials I was about to face and how He would restore what had been taken from me.  In this new context, “the waters” became a metaphor for chemotherapy and “the fire” a metaphor for radiation treatments.  And what was God’s promise amid the trials I was about to face?  That He, the Holy One of Israel, who is my God and my Savior, would be with me!  And, not only that – the waters would not overwhelm me and the fire would not consume me.  I claimed these promises, made to the people of Israel, for myself and I repeated these verses again and again that morning and for every day that would follow.

The nurses who greeted me when I checked-in at the second floor infusion department were extremely kind and upbeat.  After drawing blood and ascertaining my weight, they directed me to one of a series of stations where chemotherapy is administered.  Each station was composed of four recliners; two on one side and two across from them, with a privacy curtain that could be drawn around each recliner. 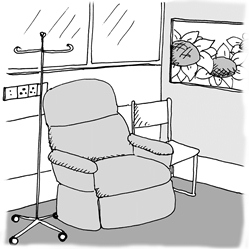 Reading materials were readily available as were extra chairs for any friends who would be keeping the patient company during his or her infusion.  Along the wall which ran around the perimeter of the building were floor to ceiling windows which afforded a great view of the sky.  It was clear to me that a lot of thought had gone into the design of this treatment area, to make it as convivial as possible for patients undergoing chemotherapy.  I was quite impressed.

The nurses showed Sam where to find snacks and juice drinks just in case there was no one available to get them for us when we wanted them.  Another nurse came by to insert an I-V into a vein on the back of my right hand and when she was finished, she propped up my arm under a pillow.  She also gave me a warm blanket just in case I felt a chill during the infusion, something which many chemotherapy patients experience.

To start with, I was given intravenously a simple solution of saline, but once the staff received a report about my blood work, which had been analyzed and found acceptable, a nurse came by with my bag of liquid chemotherapy drugs and attached it to the pump.  She checked my I-D bracelet and compared it with the information on the bag, just to make sure she had the correct medication. Then she set the timer and the infusion began.

I chose not to watch as the amber-colored liquid dripped from the bag into the clear plastic tube which led straight to the I-V in my hand.  Instead, I ignored it and talked about theology with Sam, a favorite subject of conversation for both of us.  Over the course of the next hour, several more patients were seated in my station and each one greeted us as they took their seat.  It was clear that they had been here before, because no one needed to explain anything to them.  I learned that some of them had been coming every Monday for weeks.  Others had come, on and off, for the past year or so.  Every cancer has its own chemotherapy protocol.  Mine was once a week for seven weeks; for the woman across from me, it was six rounds of chemotherapy, one every three weeks.

I discovered that my pump, which was attached to a pole with wheels, could run for a short period of time on just a battery.  So, I was free to use the restroom after a nurse unplugged several cords from the wall and wrapped them around a hook on the pole.  I took advantage of my moment of freedom by also taking a brief walk around the floor.  Shortly after returning to my recliner, the pump timer went off signaling that the first of the two bags of chemo had been depleted.  A nurse replaced the first bag and the timer was set again.

Time passed quickly and by 11:45 am, I was done.  I was surprised at how good I felt and the nurse who removed the I-V from my hand explained that the initial saline infusion had also included some Benadryl, to help prevent an allergic reaction as well as a steroid, in an effort to help keep nausea at bay.  The steroid clearly had the desired effect because I had a huge appetite, so Sam and I hurried off to get some lunch before I was due for my first radiation treatment.

After lunch, we took an elevator to the lower level of the Cancer Hospital and Sam waited with me in the radiation oncology waiting room until my name was called.  We sat under a skylight to take advantage of the natural light.  On the walls hung acrylic paintings depicting scenes of natural beauty from around North Carolina.  Here, too, much thought had gone in to creating a calm and inviting atmosphere for the patients.

After a brief wait, a technician came out and escorted me back into the area where treatments are given.  There are three radiation machines in use at the Cancer Hospital, each in a separate room with its own staff and each with its own name.  Mine was called “Tomo” short for tomography, which is the term for a newer technique in radiation therapy.  Dr. Chera wanted me to receive my treatments on this machine because head and neck cancer patients experience fewer long-term side-effects from radiation when a Tomo machine is used.  It seems to do a better job of pinpointing the target area than the other machines.

I brought a CD with me – Fernando Ortega’s “Christmas Songs” – and a technician took it from me as I entered the room and he inserted it into the player.  Next, I was instructed to lay down on the pallet and I closed my eyes as they placed the mask over my face, attaching it securely to the pallet.  A warm blanket was placed over me and they gently strapped my body to the pallet.  My heart was pounding while they did this and I repeated to myself the opening verses of Isaiah 43.  Once I was set, the technicians left the room and I could hear their voices over an intercom as they programmed the machine for my treatment. Soon the pallet moved and I knew I was headed into the machine.  I kept my eyes closed.

To my surprise and relief, I experienced no discomfort.  I could heard the clicks and whirs of the machine, but there was nothing else to indicate that I was undergoing a radiation treatment.  As Fernando Ortega’s voice filled the room, I suddenly felt as though I was in a soaring cathedral.  Astounded at how the Holy Spirit could so fill my imagination, creating a sense of holiness in a space which seemed at first so frightening, I responded by joyfully offering praise to the Lord.  This time of praise lasted for the duration of the treatment.

As the technicians entered the room to liberate me from the pallet, I knew that with the Lord by my side, I would be able to return the next day, and every day after that – because the Holy One of Israel, my Savior, would be with me.

Next installment: Side effects set in.