He rescued me from my powerful enemy, from my foes, who were too strong for me. They confronted me in the day of my disaster, but the Lord was my support. He brought me out into a spacious place… (Psalm 18:16-19)

The Raising of Lazarus, artist and date unknown

On a Sunday morning in late August 2012, I was preparing to lead a service of worship at a local church.  I stood near the pulpit looking over the service bulletin and making last-minute changes to my sermon.  Two women were kneeling at the altar rail nearby.  One of the women seemed distraught and I thought I should inquire whether they were in need of pastoral assistance.  The first woman, whom I shall call Denise, although that is not her real name, explained to me that her friend Mary, who was visiting from another country, had converted from Islam to Christianity, along with her children, several years before.  However, the relatives of Mary’s deceased husband, who were Muslim, were pressuring Mary to renounce her faith in Jesus and they were withholding financial support from her, which she needed to help raise her children.

Denise had brought Mary to the altar rail that morning to pray, because Mary was thinking about returning to the practice of Islam, just to make life easier for herself and her children.  As I listened to Denise tell her friend’s story I could see from the look on Mary’s face that she was in a dark place, spiritually and emotionally.  When I asked Mary if I could pray for her she readily accepted my offer.  “But first,” I said, “let me tell you a story.”  When she nodded her approval, I began to tell her the story of my recent illness.

I recounted for Mary how the tumor in my right parotid gland had been misdiagnosed initially – and that almost four weeks passed before a correct diagnosis was made.  The tumor could have been removed easily if so much time had not elapsed between discovery and diagnosis – and my follow-up treatment would have been far less aggressive.  Mary’s eyes got big as I explained to her how every doctor told me that in order to remove the tumor, my facial nerve would have to be severed, leaving my face paralyzed on the right side.  “But the Lord intervened and the surgeon was able to spare my nerve, to his great surprise.”  I showed her the scars on the right side of my head and neck.

Next, I explained how I had to undergo six and a half weeks of radiation and chemotherapy following the surgery to remove the tumor.  “These treatments made me very sick, but not nearly as sick as my doctors thought I would be.  My friends prayed for me and the Lord graciously spared me the worst of the side effects.”

“And then you were fine,” said Mary, expecting me to nod my head in agreement.  “No,” I answered. “The cancer metastasized to my lungs and my doctor told me there was nothing more that could be done for me.”  Mary looked puzzled because I appeared to be in fine health.  “However, another doctor removed the tumors from my lungs and God spoke to me in the hospital and told me I would be all right.  Even though that last surgery was only a month ago, I feel really good.  The Lord Jesus took away all the pain from the surgery and is giving me back my strength.  Nothing is impossible for Him!”

Now I was ready to make my point: I told Mary that although life can be difficult for those of us who believe in Jesus, if we trust Him, He will fight on our behalf.  “Stand on His word to us in Scripture, Mary.  Jesus will protect you and help you through whatever troubles are ahead for you.  You will have to face them, but you won’t face them alone.  He will never leave you or forsake you – and He can do infinitely more than you can ask or imagine.  That is what He did for me – and what Jesus does for one person, He willingly does for another because He has no favorites.  Jesus has seen to it that you have Christian friends to stand by you in this difficult time.  Ask your friends to hold you up in prayer, as mine did for me and my family.”

When I finished with my testimony, I invited Mary to give Jesus a chance to fight on her behalf.  She and Denise prayed together while I finished preparing for the service.  Afterwards, Denise told me that Mary decided to recommit her life to Jesus.  I was overjoyed to hear this news and I thanked the Lord for giving me a testimony that demonstrates what great power He can bring to bear in the life of anyone who calls upon His name.  Now that I have experienced personally Jesus’ power, I am able to speak confidently about how He can make a way where no way exists, something I couldn’t do before with the kind of conviction I have now.  I give thanks that what God did in my life can inspire someone else to trust in the Lord.

Slightly less than a year after I talked and prayed with Denise and her friend Mary, I began serving as Interim Rector of Church of the Holy Cross in Raleigh, North Carolina.  I couldn’t have imagined in the midst of treatments and surgeries in 2012 that I would be blessed to return to fruitful work in ministry within a year.  And when my service as Interim Rector came to a close last summer, I was soon called to serve at Holy Trinity Church.  I began my work in September with this thriving congregation, which is building a new  church in downtown Raleigh.  I oversee pastoral care and prayer ministries, including a ministry of healing prayer.  The Lord has truly given me beauty for ashes. (Isaiah 61:3) 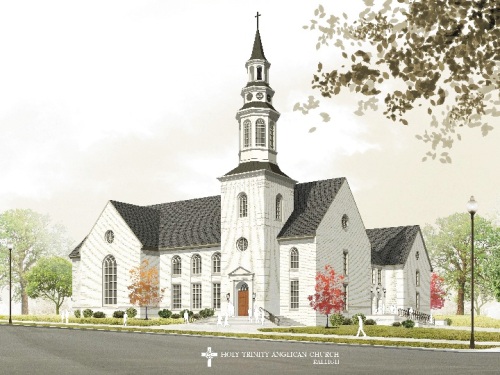 As for the icon portraying the story of the raising of Lazarus: once I returned home from the hospital I took it from the storage box in which I placed it and hung it on a wall in my bedroom.  I often recite to myself verse four of chapter eleven in the gospel of John, remembering how the Lord directed me to it while I was recovering from surgery in late July of 2012.  Yet, verse forty-four, the verse I initially turned to after I came across that icon unexpectedly as I was cleaning out a closet, has meaning for my ministry these days: “Unbind him and set him free.”  Verse forty-four is, in a sense, my charge for the life the Lord has given back to me: to remove the grave cloths, so to speak, from those whom God is restoring back to life through His son, Jesus Christ.

Jesus longs to bring back to life those of us who are lifeless – whether due to sin or sickness or doubt – and bless us with an abundant life.  The abundance He offers is rooted not in material wealth but in saving and life-transforming grace.  It is an abundance I discovered is possible, even in the midst of cancer.

To God be the glory.