But when you are invited, take the lowest place…(Luke 14:10)

I continue this week with some thoughts about the parable Jesus told when he went to dine at the home of a prominent Pharisee. The parable can be found in Luke’s gospel, chapter fourteen, verses eight through fourteen. In it Jesus instructed his listeners, many of whom were Pharisees and experts in the law, to take the lowest place (where the servants usually sat) and not the place of honor, when invited to a wedding feast.

What prompted Jesus to tell this parable was the behavior of his fellow guests. He observed how they attempted to claim the best seats at the table. It would appear as though vying for places of honor at dinner parties and calling attention to one’s social rank were not uncommon activities among religious people in first century Palestine. Luke supports this observation when he tells us elsewhere in his gospel that Jesus noted how “the teachers of the law…like to walk around in flowing robes…; [they] love to be greeted in the marketplaces and have the most important seats in the synagogues and the places of honor at banquets…” (20:46)

Insecurity, which is a manifestation of pride, is at the root of this preoccupation about social standing. The deeply insecure person is always thinking, first and foremost, about himself, always looking for a way (sometimes unconsciously) to call attention to himself. He or she is never satisfied; every day they must renew their efforts to be noticed and singled out. Their insecurity is insatiable.

But Jesus came to cure our insecurity and set us free from pride. Only he could do this because, unlike us, he did not care what the world thought of him or whether he would receive the honor due his name. All his earthly life Jesus sought only to glorify his Father, not himself. The apostle Paul highlighted Jesus’ complete lack of pride when he wrote this in his letter to the Philippians that “[Jesus is] in very nature God, [but] did not consider equality with God something to be grasped,but made himself nothing,taking the very natureof a servant…And…he humbled himselfand became obedient to death—even death on a cross!” (2:6-8) 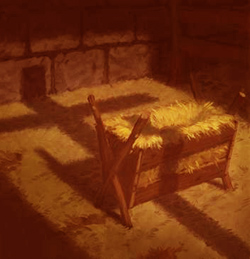 What Paul meant, in a manner of speaking, is that Jesus took the lowest seat when he was born as one of us in a stable in Bethlehem. The Creator of the world set aside his well-deserved status and became like one of his creatures. The manger in which he was placed symbolized his complete lack of social standing. He then went on to live his life as a servant and died as an outcast, all for our benefit. Jesus had no pride, nor sin of any kind, yet, he took upon himself the sentence we deserved for all our sins and insecurities. He took our place so that we could move up higher…before God.

Now through faith in Jesus, God gives each of us a seat of honor, dearly paid for by his Son. In Jesus we find a cure for our insecurity and exalted status as God’s beloved children, worthy now of a seat of honor at his table. Through his Son, God has determined we are of infinite value to him, a status no one can change.

But it’s essential we acknowledge what it cost God to raise us up higher. This is what it means to humble ourselves before God (v.11). So now when I catch myself comparing myself to others (as I mentioned in my post last week) I stop and silently say something like this, “Lord, forgive me for usurping your role. It is not my place to judge myself or anyone else. Set me free from pride and help me now to allow my true worth, which came at your expense, satisfy my deepest insecurities.” This “humbling” is the right kind of medicine for what ails us all.

There is yet one more point to be made about this passage: Jesus calls us to be servants, like himself, by reaching out to people whom our society does not value, such as those who are poor or broken in some way. We are to give them a seat of honor and wait on them, like a servant, in our church home or at a table somewhere else, and by so doing demonstrate in a literal way what Jesus does for us all.

This kind of Christian service is an important and necessary reminder, especially at this time of year, that our high standing doesn’t depend on someone else being at the bottom. Jesus’ way of viewing the world and our place in it runs counter to our culture’s view of status, but thankfully, in God’s kingdom, there is an honored place for all who trust in Jesus, alone, to determine their true worth.

Next week: A Christmas sermon.

If you would like to listen to my sermon on the parable Jesus tells while dining at the home of a Pharisee, click the pulpit icon, below: 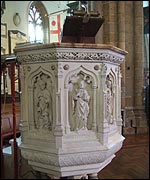 I am an Anglican priest, author, wife and mother. Writing and teaching about Christian life and faith are passions of mine.
View all posts by Claudia Dickson Greggs →
This entry was posted in The Lowest Seat and tagged humility, Luke 14:7-14, pride. Bookmark the permalink.