Last week in letter No. 3: What God Says to Us in the Bible, I wrote about how the Bible is different from other sources of information.   This week  I write about how the stories  in the Old and New Testament are related to one another.

The story the Bible tells began many thousands of years ago.  In it we hear how God spoke directly to specific people, like Abraham, Moses, Elijah and David. 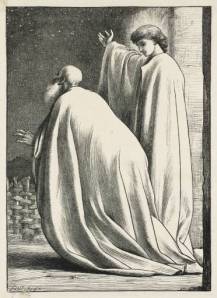 In everything God said to these people, He proved Himself trustworthy.  God made good on all that He promised.  He formed an entire nation from this one man, Abraham.  To all of Abraham’s descendents, called the Israelites, God provided a land to live in, sound laws to live by, many blessings to enjoy and constant care.

At first, the reports of all that God had to say to His people were passed on by word of mouth and retold again and again whenever the Israelites got together for worship.  Eventually, these details were written down.  To these stories were added a record of all that the judges and kings of Israel did, both good things and bad.  No deed is left unexposed.

Also included are warnings from God through the prophets, as well as prayers, poems, and words of instruction and guidance.  Historians can verify specific incidents in the history of these Israelites.   Ancient copies of all the stories, which have since been translated into many languages, still exist.

God had hoped that the Israelites would always trust Him and heed His words, but they didn’t.  They began to worship the gods of their neighbors, mere objects of metal or wood.  They disobeyed God’s laws and made treaties with nations with whom God told them to have nothing to do.  God warned them through the prophet Isaiah:

Woe to those who go down to Egypt for help, who rely on horses, who trust in the multitude of their chariots and in the great strength of their horsemen, but do not look to the Holy One of Israel, or seek help from the Lord…Return to him you have so greatly revolted against, O Israelites. For in that day every one of you will reject the idols of silver and gold your sinful hands have made. (31:1, 6-7)

God had such hopes for His people.  He wanted them to be a shining light, a sign of His justice and mercy, to all the nations of the world.  But they began to think they didn’t need Him so much, after all.

God gave them many chances to mend their ways, but they ignored them all.  Finally, He let foreign nations overrun their country.  Although many of the Israelites were killed and the rest sent off into exile, He preserved the lives of people who had remained faithful.

To this remnant He promised to send a Savior.  And with that promise, the stories of what Christians call the Old Testament come to a close.

One of the many amazing things about these stories is that whenever we read or hear them, we begin to see a bit of ourselves in them.   Whether it’s the old man, Abraham, who is both faithless, at times, and yet, full of trust in what God says He’s going to do, or King David, who loves the Lord, but makes a number of really poor judgment calls, or the Israelites, who always seem to forget, when faced with a new challenge in the wilderness, how God has always provided for their needs – on some level this is also our story.

These are not tales about super-heroes or super-villains; they are the accounts of people just like you and me.  We are invited to learn from their mistakes and take up the task of following faithfully after the God who always keeps His promises, even when it costs Him dearly.

The story continues on in the New Testament with the news that the awaited Savior, Jesus, is on the way.   This news is proclaimed by a cousin of Jesus’ called, John the Baptist.  It was of John whom the prophets Malachi and Isaiah wrote:

I will send my messenger ahead of you, who will prepare your way – a voice of one calling in the desert, ‘Prepare the way for the Lord, make straight paths for him.’ (Mark 1:2-3; Malachi 3:1; Isaiah 40:3)

Jesus gathers around him a group of followers, from whom he chooses twelve to be his apostles.  To them alone he reveals his identity: he is the promised Messiah, sent to save God’s people from their sins and turn their hearts back to Him.  He will accomplish this by allowing himself to be put to death and then raised back to new life.  (More about this in letter No. 5: Why Jesus Had to Die.)

After his resurrection, Jesus charges his disciples to bring the good news of his victory over sin and death to people everywhere.  The story is carried on through the lives of the apostles who spread the good news about Jesus far and wide.

Through them the Christian church is launched and the number of believers grows exponentially.  From now on anyone can come to know God, believe in his Son, Jesus, and belong to the community of fellow believers, called the Church.  And to every generation of believers since then God speaks when they open their hearts and minds to hear what He says in the Bible.

Here is what one of Jesus’ apostles has to say about the Bible being God’s word to us:

But as for you, continue in what you have learned and have become convinced of, because you know those from whom you learned it, and how from infancy you have known the holy Scriptures, which are able to make you wise for salvation through faith in Christ Jesus. All Scripture is God-breathed and is useful for teaching, rebuking, correcting and training in righteousness, so that the man of God may be thoroughly equipped for every good work. (2 Timothy 3:14-17)

Next week Letter No. 3: What God Says to Us in the Bible concludes.

Discussion Questions for Ninth Installment: What God Says to Us in the Bible.

I am an Anglican priest, author, wife and mother. Writing and teaching about Christian life and faith are passions of mine.
View all posts by Claudia Dickson Greggs →
This entry was posted in Bringing Home the Faith and tagged basic Christian beliefs, Christian doctrine, discipleship, Scripture, teens and faith, the Bible. Bookmark the permalink.