Abraham and Isaac, part one

Then God said, “Take your son, your only son, whom you love—Isaac—and go to the region of Moriah. Sacrifice him there as a burnt offering on a mountain I will show you.” (Genesis 22:2)

The story in Genesis where God calls Abraham to sacrifice his son, Isaac, is one that falls very hard on modern ears.  The notion that God would even consider asking Abraham to kill his own, or any, child is horrific.  What kind of God asks such a thing?  And then there’s Abraham who doesn’t even raise his voice in protest.  What kind of father would carry out such a directive, without even putting up a fight? 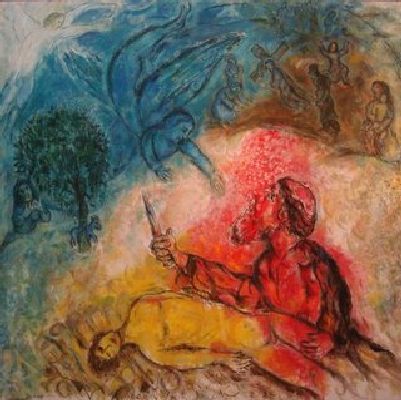 But questions about motive and feeling, which are quite appropriate when discussing great works of literature, sometimes obscure our way when reading the Bible.  Attempting to identify and understand the inner workings of the characters in a biblical story in the same way as we would with a William Faulkner novel, for instance, will not lead us to the conclusions we need to reach in this passage.

Instead, the most important questions to ask when reading the story of Abraham and Isaac have to do with uncovering whatever truth about God, and about ourselves, is being conveyed.  Asking what it is we are to learn, to incorporate into our life of faith, will end up being the most profitable line of inquiry here.

We begin a full ten chapters before this story where we are told about how God first establishes communication with Abraham.  He instructs Abraham to leave his country and his father’s family and travel to a land which God will show him. (Genesis 12:1)  God adds to that the promise that he will make a great nation out of Abraham and his descendents.  But, it’s important to note that at the time of this promise Abraham is seventy-five years old and childless.  Yet,  Abraham puts his faith in God and leaves behind all that he has known from childhood and sets out for a distant land, one unknown to him, with his wife, Sarah, his nephew, Lot, and their servants and possessions.

Upon arrival in the land of Canaan, which is already inhabited, God makes an additional promise to Abraham, saying that he will give the land to Abraham’s descendants.  But, years go by and Abraham still has neither descendant nor deed to any property.

So in chapter fifteen, Abraham presses God about the promises made to him, and he does so with a surprising degree of forcefulness.  And God responds, graciously, by making a most unusual covenant with Abraham.  By binding himself in this covenant, God declares, upon pain of death, that he will deliver on his promises to Abraham, of an heir and land for Abraham’s descendants, and will go so far as to take responsibility if Abraham does not deliver on his own promises.  Such a step was unheard of in biblical times as well as in our own.  It prefigures the sacrifice God will make one day on Calvary.

And there is yet one more instance where Abraham presses God, this time bargaining with him in chapter eighteen on behalf of the people of Sodom and Gomorrah.

What we learn in these passages is that God allows, even invites, Abraham’s spirited interaction.  This is not a relationship in which God delivers ultimatums from on high which Abraham must meekly obey.  God accepts Abraham’s questioning and persistence.  He welcomes dialogue and has no problem with Abraham pressing him on certain points.  Although this is not a relationship of equals, it is one in which Abraham is treated with respect and granted many rights and privileges.  God delights in this level of intimacy with a human being. 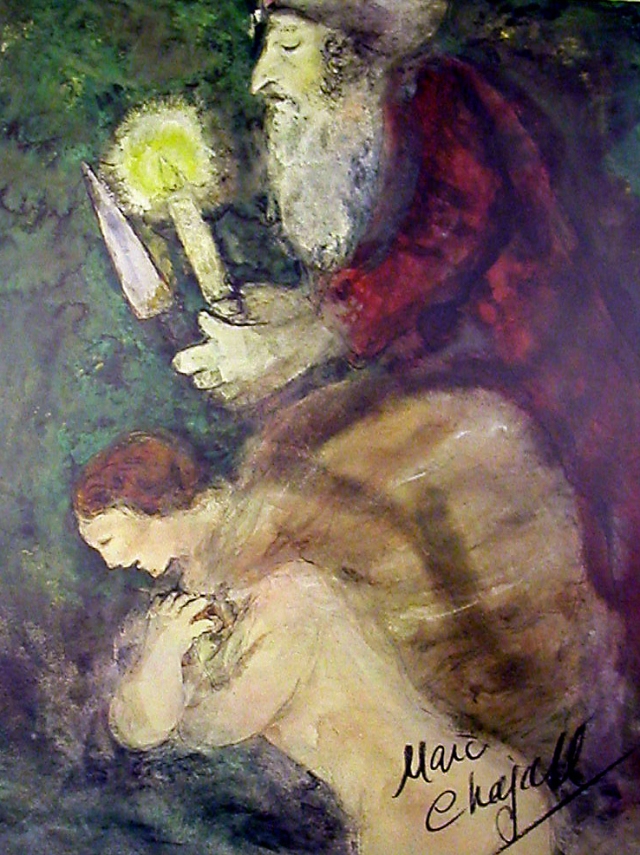 Abraham Walking with Isaac to the Land of Moriah by Marc Chagall, 1931

But once the promised son, Isaac, is born, it is now Abraham who will be pressed.  God has shown himself completely faithful in their relationship.  He has not withheld anything from Abraham.  So, now it is Abraham’s turn to demonstrate that in this remarkably close relationship between Creator and creature, he, too, will not withhold anything.

So God instructs Abraham to take his only son, Isaac, whom, Scripture tells us, Abraham loves, and go to the land of Moriah and offer him there as a burnt offering.  A burnt offering is a gift, one that is brought before God alive, and then slaughtered on an altar and set aflame.  Such a gift was a way of humbly acknowledging that God is one’s sole provider, protector and master.  Burnt offerings were costly, because only the finest of what one owned was considered worthy enough to bring before God.  It was a truly a “sacrifice” to make such an offering.

Yet, Abraham demonstrates he will not withhold from God even what is most precious to him.  He heads to the land of Moriah with every intention of doing just what God has asked.  This does not mean he was a brutal father or that God was a bloodthirsty deity.  At this time and in this culture, child sacrifice was practiced by those living around Abraham.  Neither does this mean Abraham took God’s request lightly.  However, in the end he is willing to show God that nothing, not even his beloved son, will come between them.

Next week: Abraham and Isaac (part two): Is there anything you’ve let come between yourself and God?

I am an Anglican priest, author, wife and mother. Writing and teaching about Christian life and faith are passions of mine.
View all posts by Claudia Dickson Greggs →
This entry was posted in Abraham and Isaac and tagged Abraham and Isaac, Genesis 12, Genesis 15, Genesis 22, idolatry. Bookmark the permalink.

3 Responses to Abraham and Isaac, part one