In the fifth chapter of Mark’s gospel we are presented with two stories about healing.  We can learn a lot from them about calling on Jesus today to heal, so in this post I am writing about the first story, in which a woman suffering from a discharge of blood is healed,  and in my next post about the second one, in which a young girl is raised back to life.

I begin by acknowledging that some people think such healings can’t happen anymore; that they occurred only while Jesus walked this earth.  However, I disagree with this conclusion.  Because Jesus was resurrected from the dead by his Father, he was set free, forever, from the limits of time and space.  He can be anywhere at any point in time — and in all places at once.  Furthermore, Scripture tells us he is the same yesterday, today and forever (Hebrews 13:8).  So, the conclusion I’ve reached is that Jesus can just as readily heal today as he healed while walking this earth.

I turn now to the story about the woman who was suffering from a hemorrhage.   Her attempt to approach Jesus is made difficult by the fact that he is surrounded by a very

James Tissot, The Healing of the woman subject to bleeding; Date: 1886-96, Watercolor

large crowd – and they are pressing in from all sides.  She concludes that if she can just get close enough to touch the hem of his garmet she will be healed and when she does so she is healed instantly. Jesus realizes at once that something miraculous has occurred, because Mark tells us that he is “immediately aware that power has gone forth from him” (5:30).

This power that went forth from Jesus isn’t just any kind of power, though.  In Greek, the word is δυναμιν (dunamin)  from which we get the English word, dynamite.  So, we are given the impression that his power is explosive.  but it isn’t something he suddenly acquires.  This kind of power is an essential element of his character and being, coming directly from his heavenly Father.  And such power, along with innate authority, combine to make all things, whether living or non-living, subject to him.

In the previous chapter Jesus exercised his power by calming a storm that arose over the Sea of Galilee (4:35-41).  This wasn’t some cloudburst; it was a furious squall, the kind which can come up suddenly and be quite dangerous.  His disciples, who were in a boat with Jesus, feared for their lives and petitioned him to do something about it.  Mark writes that Jesus stood up and, “…rebuked the wind and said to the waves, ‘Quiet!  Be still!’”  As I envision this moment, it has a kind of Charlton Heston quality about it. 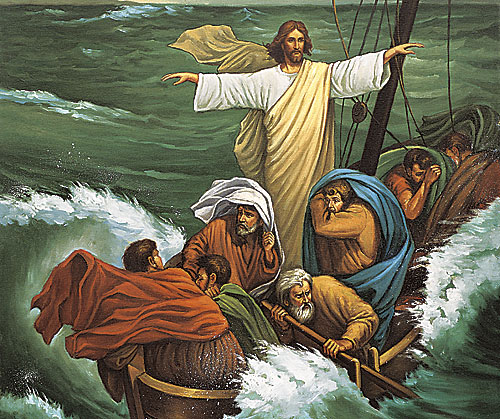 However, a better translation from the Greek would be, “Jesus said to the wind, “Settle down” and to the waves, “Hush.”  To this fierce storm, in which the disciples feared they were going to drown, Jesus speaks to the wind and the waves as a parent would to a child who is being fussy.  No yelling or theatrics.  He calmly commanded the elements to behave.  So we learn that even over nature, Jesus has inherent power and authority.

Furthermore, in the story which precedes the one about a woman with the discharge of blood, a man with an evil spirit approaches Jesus (5:1ff).  This spirit refers to Jesus as the “Son of the Most High God” (v.8) and Jesus commands it to come out of the man.  As it does, it goes into a herd of pigs, which rush down an embankment and are drowned in the water, below.  As these stories are presented, one after another in Mark’s gospel, we begin to see that Jesus’ authority is boundless, for over evil spirits, as well as all of nature, he exercises power.

As for the woman with the discharge of blood, the only thing we are told about what motivated her to seek healing from Jesus is simply that she “heard about him.”  We are offered no other explanation than that.  Whatever she was told about Jesus was enough for her to think that he had the power to heal her – and that she need only touch his garment.  The evangelist, Mark, also adds that she had sought remedy for her illness from many physicians over the years and spent all that she had, but instead of making her better, she only grew worse.

Next we are told that “she came up behind Jesus in the crowd and touched his garment” and that “immediately her bleeding stopped and she felt in her body that she was freed from her suffering.” (5:27-29) 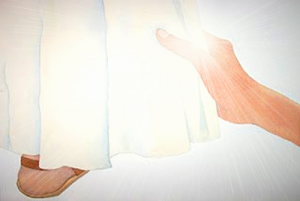 One might think, from the way this encounter is translated in most Bibles, that this woman merely ran her fingers across the hem of Jesus’ garment.  “Touch” seems like such a genteel word.  However, the Greek word actually means “to connect, to bind, to apply oneself to something.”  The visual image should be that of a woman grabbing a hold of Jesus’ garment with great determination.  This was someone who was not going to be deterred from the healing she so desperately sought from the One she knew could heal her.

When he discovers that it was this woman who had grabbed a hold of his garment, Jesus says to her, “Your faith has healed you.”  Her faith – that Jesus could and would heal her – manifested itself as humble determination to receive healing from him.  She serves as a model for those of us today who are in need of healing: Jesus can and he is willing, so we shouldn’t let anything (or anyone) deter us from seeking it from him.

Next time:  What we learn about healing from the story of the dead girl raised back to life.

I am an Anglican priest, author, wife and mother. Writing and teaching about Christian life and faith are passions of mine.
View all posts by Claudia Dickson Greggs →
This entry was posted in Healing Prayer and tagged cancer, healing, healing prayer, Hebrews 13:8, Mark 4: 35- 41, Mark 5: 1-13, Mark 5: 21-43. Bookmark the permalink.