Martha and Mary (part one)

And she had a sister called Mary, who sat at the Lord’s feet and listened to his teaching.  (Luke 10:39)

This week I continue my series on passages from which I’ve preached recently with the story of Martha and Mary.  These two sisters welcomed Jesus and his disciples into their home as Jesus was making his way to Jerusalem.  You can find this passage in Luke’s gospel, chapter ten, verses thirty-eight through forty-two.

The evangelist tells us “Martha was distracted by all the preparations that had to be made” [in order to provide dinner for Jesus and his disciples].  However, “Mary… sat at the Lord’s feet listening to what he said.”  What is implied here is that Mary chose to study with Jesus instead of helping her sister with meal preparation.

To our modern ears, it may not sound unusual for someone to want to listen to what Jesus has to say, even if they’re shirking other responsibilities. After all, how often does one get to hear Jesus teach?  But in first century Palestine, Mary was doing something shocking, something that only men were allowed to do – and her sister Martha, was quite upset about it.

In a Jewish household of this era, men and women gathered in separate quarters.  The women did their work, which was childcare and food preparation, apart from the men.  The men did their work, which was to study the Torah, the prophets and the writings apart from women. The sexes were strictly segregated in this regard and the gender roles for men and women were very traditional.  By leaving the area for food preparation and entering the area occupied by the men for study Mary crossed a boundary that no Jewish woman was allowed to cross. 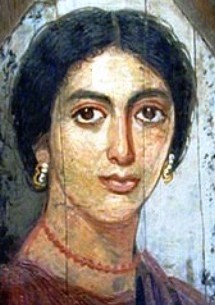 Luke tells us plainly that Mary was sitting “at the feet of Jesus.”  This may sound perfectly normal for someone to do, even a woman living around the time of Jesus.  However, the gospel writer isn’t suggesting Mary was simply listening attentively to what Jesus is saying, even though Mary is often portrayed this way in religious artwork.  Instead, Luke is indicating Mary was Jesus’ disciple.

Only a rabbi-in-training, a disciple, sits at the feet of someone, someone who is his teacher, from whom he is gaining knowledge so that he can eventually become a rabbi or teacher himself.  We find another example of this expression in Luke’s companion piece to his gospel, The Acts of the Apostles, where Paul describes himself as “at the feet of Gamaliel” his teacher. (Acts 22:3; literal translation from the Greek phrase, προς τους ποδας Γαμαλιηλ)

In Jewish culture, only men studied the Scriptures, only men were disciples and only men became teachers or rabbis.  Yet, here we have an instance, recorded in Scripture, where Jesus not only condones the practice of a woman studying as a disciple, he gives it his blessing and wholehearted endorsement.

“[Mary]”, he says, “has chosen the good portion – and it will not be taken away from her.” (v. 42)  Instead of “portion” a better translation here of the Greek word μεριδα would be assignment or destiny. The word literally means: an assigned part.  Jesus is saying Mary has chosen God’s good (better yet, “distinguished”) assignment for her, which is to sit at the feet of Jesus.

Many modern people (including myself, until recently) completely miss the significance of Mary’s action and Jesus’ blessing of it. Contrary to popular opinion, Jesus did not call only men to be his disciples.  He also allowed Mary, Martha’s sister, to sit at his feet as a disciple.*

*For this post I consulted a paper given by Dr. N. T. Wright, former Bishop of Durham, England, entitled, Women’s Service in the Church: The Biblical Basis.  Dr. Wright, a noted evangelical theologian and biblical scholar, was addressing the Symposium, ‘Men, Women and the Church’ at St John’s College, Durham, on September 4, 2004.  Click his photo, below, to read his paper:

I am an Anglican priest, author, wife and mother. Writing and teaching about Christian life and faith are passions of mine.
View all posts by Claudia Dickson Greggs →
This entry was posted in Martha and Mary and tagged disciple, Luke 10:38-42, Martha and Mary, N. T. Wright, women and Jesus. Bookmark the permalink.

10 Responses to Martha and Mary (part one)