Letter No. 4: Why Jesus Was Born on Earth

When I first set out to write about Jesus, I thought one letter would be plenty.  But once I was underway I realized one would never be enough.  It’s a lot to explain who Jesus is, why he was born among us and why he had to die – and connect all that to the Old Testament.  It’s a not complicated process – and I think the subject is fascinating – but it does take up a lot of space in print.

So, I’ve divided the story of Jesus into two letters.  This first one (in three installments) takes a look at the reasons for his birth.  The Christian Church calls this story the doctrine of the Incarnation, a word that means, “enfleshed.”  John says in his gospel,

The Word became flesh and made his dwelling among us.  We have seen his glory, the glory of the One and Only who came from the Father, full of grace and truth.  (1:14)

When we celebrate Christmas we are celebrating the fact that our God took on human flesh.  He did not masquerade as a human being.  He truly became one of us, living just as we do, with the same limits and struggles and temptations.  No other world religion has a god who would stoop to the level of becoming one of his own creatures.  I attempt in this letter to explain why God chose to become like us and how Jesus’ birth completely changed the course of human life.

I’ve written about how to explore your faith in God and how to pray; now it’s time to turn our attention to Jesus, God’s Son.   Here are some facts I think you already know about Jesus:

But here is something we have not talked about before in great depth: why Jesus was born on earth.  The simple truth is that Jesus came to live in our world because something about human life had gone terribly wrong.  But this deserves a fuller explanation.  So, in order to understand what went wrong, what needed urgently and desperately to be fixed, we shall have to go back to the very beginning of the Bible.

The first book of the Bible, called “Genesis”, tells us that God created the world and all that is in it.   The pinnacle of His creation, man and woman, God made in His own image (Genesis 1:27). 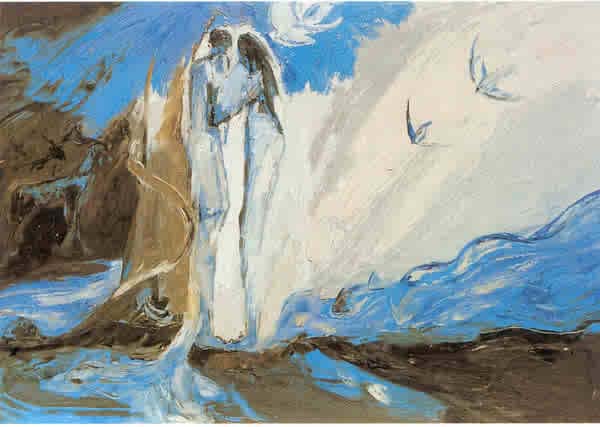 You may wonder, “What does it mean that we are created in God’s image?”  It means that we are designed to be honorable, generous and exercise good judgment, like God, and to love as God does.  In order to live our lives fully as creatures created in His image, He gave us gifts and talents to use for good in His world, on His behalf.   God also gave us a purpose: to glorify Him and to enjoy His company.

God hoped we would trust Him in all things, turn to Him for whatever we need, and live with confidence in the knowledge that He would do what was good and right for us.  He set boundaries for us, out of His great love, and hoped we would respect and keep them because they were for our own good.  Yet, in all these things, God did not require us to love, trust and obey Him.  He gave us the ability to choose to do so.

In the story of Adam and Eve, which comes right after the story of creation, we are told how these first two people make a really bad choice.   In the Garden of Eden where they live there is a serpent who tempts them to distrust God and cross the boundary He set up for them.  (This is always a mistake because God is completely trustworthy.)  God had said to Adam and Eve,

“You are free to eat from any tree in the garden, but you must not eat from the tree of the knowledge of good and evil, for when you eat of it you will surely die.” (Genesis 2:16-17)

This serpent, who was very crafty, knew exactly what to say so that it would entice them to disobey God.  It said to Eve,

Notice how the serpent exaggerates what God commanded and makes it all seem unreasonable.  (To this day, human beings fall for the strategy the serpent used.)  But in truth, God said there was only one tree that was off-limits, and for good reason.  Eating from it would bring an end to life as they knew it and would lead to their eventual death.  Every other tree, though, was available to them.  God was being incredibly generous, not mean, selfish or condescending.

When Eve corrects the serpent’s statement, the serpent persists by saying,

“You will not surely die.  For God knows that when you eat of it your eyes will be opened, and you will be like God, knowing good and evil.” (Genesis 3:4-5)

The first part of this statement (“You will not surely die.”)  directly contradicts what God said.  The serpent spins this lie to create doubt in Eve’s mind about God’s trustworthiness.  In effect, the serpent is saying, “God is holding out on you.  He doesn’t want you to have any fun.  He wants to keep all the good stuff for Himself.”  This lie is quickly followed up with a temptation that proves too hard to resist:  ‘…you will be like God.’  Every human being finds this temptation irresistible.

You may not think, consciously, that you desire to be like God.   Yet, consider how much time you spend thinking about yourself every day.  For example:

3)      positioning yourself in the best possible light

We all spend a great deal of time, every day, focusing on ourselves – our own wants and perceived needs.  Because we are so self-involved we end up acting as though the world revolves around us.  This is just another way of saying we are taking the place of God.  Yet, we were not created to be self-focused.  We were created to be God-focused.

Next week Letter No. 4 Why Jesus Was Born on Earth continues.

Discussion Questions for Eleventh Installment: Why Jesus Was Born on Earth

1)      Why does freedom of choice come with great responsibility? In what way did Adam and Eve choose unwisely?

4)      What is the difference between being self-focused and God-focused?

I am an Anglican priest, author, wife and mother. Writing and teaching about Christian life and faith are passions of mine.
View all posts by Claudia Dickson Greggs →
This entry was posted in Bringing Home the Faith and tagged Adam and Eve, basic Christian beliefs, birth of Jesus, Christian doctrine, Genesis 3, Incarnation, sin, teens and faith. Bookmark the permalink.