Light in the Valley of the Shadow of Death (part seven) 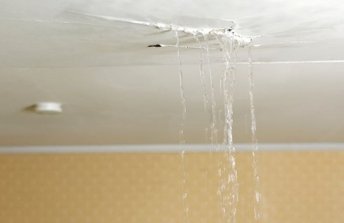 It wasn’t quite this bad…

Out of the corner of my eye I saw the water dripping, ever so slowly, from the kitchen ceiling.  As I looked more closely, I noticed that some droplets had dribbled onto the blinds which covered a large picture window.  Our kitchen table, at which I was sitting, faced that window.  It was about nine o’clock in the morning and I had come downstairs to sit and try and collect my thoughts.  But suddenly it dawns on me that the master bathroom is located directly above the area in the kitchen where I am sitting – and I had just taken a shower.  “This can’t be good,” I said to myself.

But that leak was not going to make it onto my list of things to attend to that day – or any day for the foreseeable future – because I had just been given the news, less than eighteen hours before, that I had cancer.  It turned out that the infection in the salivary gland near my right ear, was not an infection after all.  It was a deadly tumor of unknown origin and I had no way of knowing, on that morning, if it was the only cancerous tumor in my body.

For over a month my E.N.T. doctor in Raleigh had been treating me with antibiotics.  There had been no reason to think that the small bump that had appeared just behind my jaw and below my ear was anything to worry about.  But it had mushroomed into the size of a golf ball, almost before our eyes, so before another round of even more potent antibiotics could be prescribed, a needle-aspiration was done, “just to rule out anything else.”  So, on the afternoon of Monday, November 14, 2011, as I sat in Dr. Patterson’s office – expecting nothing out of the ordinary –  he read to me the results of the pathology report, which he had read only seconds before : “A very aggressive, squamous-cell carcinoma.”

I looked at him, stunned and incredulous.   “How can that be?” I asked.  He began to examine me more closely, looking into my mouth, nasal cavity and about my scalp.  “Squamous cell carcinoma is a skin cancer,” he explained, “and the primary site could not be your parotid gland; it must have metastasized there from somewhere on your head.” 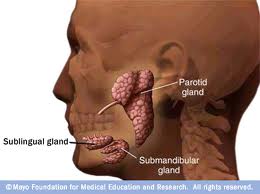 He continued to examine me, while my heart raced, but he could find no evidence of skin cancer anywhere on my head or neck.  He was puzzled.  He then excused himself so that he could consult by phone with a colleague in the E.N.T. department at the UNC Cancer Hospital in Chapel Hill.  In the meantime I went to the ladies room to try and pull myself together.  I was shaking all over and sick to my stomach.

When Dr. Patterson returned, he looked somewhat relieved.  He had just spoken with his friend and colleague, Dr. Mark Weissler at UNC, and they had reached the conclusion that the cancer was not likely to be the deadly squamous cell, even thought the pathology report listed it that way.  Instead, it was more likely to be a cancer of the parotid gland, since there was no indication of skin cancer.   Most importantly, Dr. Patterson thought my chances of survival were very good if this proposed diagnosis was correct — and if the tumor was contained in the parotid gland.  But there was much to be done as soon as possible: an MRI of my brain and a C/T scan of my neck in two days’ time and an appointment in one week with Dr. Weissler, a specialist in tumors of the head and neck.

Dr. Patterson kindly gave me his home phone number and offered to speak with my husband, Gil, later that evening, in case Gil had any questions about my diagnosis.  I thanked him for his help and waited while the nurses, with their eyes full of compassion, made the necessary arrangements by phone for the scans.  I wasn’t supposed to be sitting there, on the other side of the registration counter, trying to breathe slowly as I waited for the scans to be scheduled.  Instead, I was supposed to be walking out of the office after having just made a follow-up appointment, just like every other patient that day, with nothing more on my mind than what I was going to cook for dinner.  But I was no longer just an ordinary patient.  I had crossed over into a different country in a brief period of time – and the way back to that land where I was safe and life was mundane had disappeared.  I was now a woman with a deadly disease in her body and I had no idea where this would lead me.

As I drove from Dr. Patterson’s office in Cary to the school in Raleigh where my husband teaches, and my son attends school, I prayed and wept as I thought about telling Gil this news – I knew that having to shatter his world would be the worst part of this experience.  “O Lord, help me find the words to tell Gil,” I pleaded.  “And please, let Caleb be somewhere else when I arrive at Gil’s office, so Gil and I have some time alone.”  I prayed over and over again as my car sped along the Beltline and tears rolled down my face.  Little did I know that night that these prayers would be the first of many, many prayers that the Lord would answer powerfully, affirmatively and with perfect timing on my behalf.

I’ve written about my story, in bits and pieces, over these past seventeen months, but now it’s time for me to tell it fully, from the beginning.  Yet, this is not a tale of how bad things happen to good people, or even about human perseverance.  Instead, it is a testimony about our God and how He took every speck of evil thrown at me (and there has been plenty thrown) and used it all for good – and for His glory.  He would use even that leak in our kitchen ceiling, which couldn’t have appeared at a more inopportune time in our lives, to speak to me the words that would give me back my life.  So I hope you will follow along in the weeks ahead, so that you too will know, as I now do, that nothing is impossible for God.

Next week: the counter-attack begins.

Please note:  If you would like to read the six earlier posts in this series, go to “Select a Series” on the right side of this blog, select “Light in the Valley of the Shadow of Death,” and look for (part one) through (part six).

I am an Anglican priest, author, wife and mother. Writing and teaching about Christian life and faith are passions of mine.
View all posts by Claudia Dickson Greggs →
This entry was posted in Light in the Valley of the Shadow of Death and tagged cancer, evil, God, healing, Jesus, Psalm 13:6. Bookmark the permalink.